Sometimes photos are named with such unusual names I think I must be able to find a relative out there and one such photo is this lovely one of Ella Digweed taken in 1916. 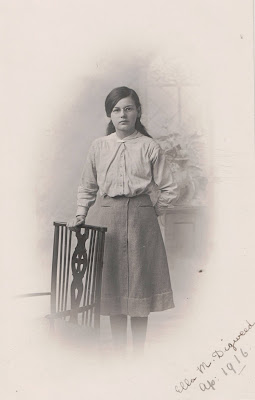 Ella Marion Digweed was born on the 10th July 1902 in Sculcoates, Yorkshire. Her parents were George and Adah Digweed and she was one of five surviving children of six. Ella's older sister Doris had died as a baby in 1901. Her father George was a coachman originally from Basingstoke in Hampshire. The family lived in Eastgate, Hessle near Hull.
Ella married Horace Riseam in July 1931 and the couple had three children. In 1939 the couple lived in Haltemprice an area in the East Riding of Yorkshire and Horace's occupation was Master Builder.  Ella died on the 29th July 1975 in Hessle (near Hull), Yorkshire, at the age of 73.
at May 08, 2021 No comments:

A Career In London Transport

I bought this framed certificate at our local charity saleroom recently for just a couple of pounds. It was presented to Frederick C Bowley on his retirement after 40 years five months service.

What a different time it was working for a company like London Transport in those days. The London Passenger Transport Board was formed in 1933 and unified services in the London area for the first time. The London Passenger Transport Act 1933 removed responsibility for 167.17 miles (269.03 km) of tram route from the London County Council, three county boroughs and a number of other local authorities in the Greater London area. It brought the UERL lines under the same control, and took over supervision of buses from the Metropolitan Police. The period also saw massive expansion of the tube network and was directly responsible for the expansion of the suburbs.

By 1948 The London Transport Executive had become the transport authority. This period saw the start of direct recruitment from the Caribbean and the repair and replacement of stock and stations damaged during the war as well as completion of delayed projects such as the Central line eastern extension. The AEC Routemaster bus was introduced in 1956. Trams were withdrawn in 1952 and trolleybuses in 1962.

Frederick must have witnessed all these changes in his career. I'm sure he enjoyed the stability of a long career after already suffering so much in his life. Frederick Charles Jesse Bowley was born on 21 June 1893 in Lambeth, Surrey, his father, Frederick, was 20 and his mother, Emily, was 19. He had one brother and five sisters. During World War One Fred went to France on the 15th March 1915 with the 24th London Regiment. He was wounded on the 29th October 1915 with a gun shot wound to his abdomen and was subsequently discharged from the army because of his wounds. A few years after this Frederick must have recovered enough to commence working at London Transport and he married Gladys Dyer in April 1923 in Willesden, Middlesex. In 1939 his occupation is listed as an Electric Motor Mechanic. The couple didn't appear to have any children and Fred died in June 1975. All those years of loyal service and the certificate sells for just £2. I really hope one day it can be reunited with family.
at May 07, 2021 No comments:

There are some photos I have that are named but I can find no record at all of the person. Even though I belong to several genealogy sites I can find no one by that name. Other people I can find their entire life in less than an hour and yet some people seem to have completely fallen off the radar. Two of these photos I have are lovely portraits of children. The sort of portrait that has been proudly given to Granny and Grandad or Auntie and Uncle. I really hope by posting them on here they may end up back with family.

The first is this beautiful colour tinted photo from around the 1950s of a little boy or girl named Ashley Vaughan Shepherd.

The other photo is of a little boy called Mark Charles De Paul taken around the 1960s. It's such an unusual name. There must be family out there somewhere. I really hope so.
at May 06, 2021 No comments:

Email ThisBlogThis!Share to TwitterShare to FacebookShare to Pinterest
Labels: Children

The Mystery Of The Crump Family Of Gravelly Hill

A very interesting photo I have in my collection is one which has been posted as a postcard and has a message on the back. It is of a couple with a little girl outside their house. I love it much more than any studio shot as somehow their personalities are in the photo. When whoever took this photo asked them to pose, the mother and daughter chose to proudly stand with their bikes. Both of them wearing their outside clothes before setting off on a ride. I'm amazed at how they chose to dress for a bike ride in those days. What would they make of all the lycra and helmets worn by cyclists today I wonder.

The postcard was sent in 1903 to an address in Cardiff and the message was signed Lewis and Blanche Crump. I managed to find them quite easily with such unusual names. Lewis Crump was born on the 2nd Oct 1862 in Dudley, Worcestershire. In 1892 he married Blanche Sidney Oram in Birmingham and they had one daughter Elsie Kate born 1893. On the 1911 census the family lived at "Pendennis" 65 Oval Rd, Gravelly Hill Warwickshire. If you look closely on the photo you can see the name "Pendennis" on the wall above the front door. It was also recorded that Lewis and Blanche had one daughter Elsie and no children had died. 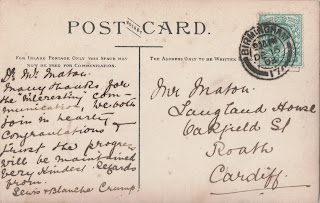 The postcard message is quite cryptic. Posted to a Mr Maton, Langland House, Oakfield Street, Roath, Cardiff. It read : Dr Mr Maton, Many thanks for the interesting communication. We both join in hearty congratulations & trust the progress will be maintained. Very Kindest Regards from Lewis & Blanche Crump.
By the late 1920s a strange thing happened to the records. On the electoral register Elsie is no longer living with Lewis and Blanche but a woman called Daphne Queenie Crump. I presumed Elsie had left home to get married, although I couldn't find a marriage record for her, and another female relative had moved in but it became even more confusing in 1931 when Elsie appeared on the register too.

Lewis Crump died on 16 April 1936 when he was 73 years old in Bournemouth. After this the mystery deepens. On the 1939 register Blanche now registered as a widow is living with Daphne Queenie who's date of birth is the same as Elsie's in 1893 and she is listed as daughter. There seem to be only two possibilities, either Elsie changed her name to Daphne Queenie or the couple adopted another daughter who coincidentally was born in the same month and year as Elsie. Blanche died on the 28th September 1953 and the sole beneficiary of her will was Daphne Crump, spinster. Daphne died in Bournemouth in 1976 and appeared not to leave a will as a notice was posted in the London Gazette asking for people who may have a claim on her estate to contact the bank. I can not know for sure if little Elsie in the photo changed her name to Daphne Queenie and if she did what was the reason, but it makes me realise, the more research I do there are mysteries in every family.
The house at 65 Oval Rd, Gravelly Hill still stands but everything looks very different today. Gravelly Hill, an area of Birmingham, is home to the present day interchange known as Spaghetti Junction. If only walls could talk 65 Oval Road may be able to answer the puzzle of what happened there to the Crump family in the 1920s, it seems it will remain a mystery.
at May 05, 2021 No comments:

Madeline Elfrida Wrightson was born in 1884 in Thanet, Kent, to Emily Wrightson (Nee Lee) age 26, and Walter Charles Wrightson, age 27. Walter Wrightson was a shipping agent and barge owner, the family lived in South Eastern Road Ramsgate, a comfortable middle class area with large Victorian villas. Madeline was the eldest child and she had two younger brothers William and Walter. The family had two live in servants. This photo was taken on the 3rd September 1884 when Madeline was 4 months and 10 days old by George Goodman in Margate Kent.

If there is one thing I have realised researching old photos it is that life was so terribly fragile for families at the time. It was unusual for all the children in a Victorian family to reach adulthood and for some large families they lost several children. Tragedy struck early for the Wrightson family as Walter the father died in 1891 at only 34 years old when his youngest son was only 3. Sadly poor Madeline died in January 1902 a few months before her 18th birthday. William and Walter her brothers lived, married and survived wars. The luck of the draw is strange sometimes.
at May 04, 2021 No comments:

Family History Photos
Welcome to Family History Photos. I have wondered so often what ancestors in my family tree, who I don't have photos of, looked like.After years of photo collecting, I started this blog to try and reunite lost family photos and documents with family members.Even if you don't find an ancestor I hope you may find the photos, and the information I have discovered surrounding each one interesting.